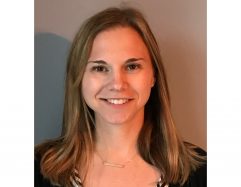 Rebecca B. Gambino is married with three children.  She graduated Friends’ Central School in Wynnewood, PA in 2000 and earned her BA from Lafayette College in Easton, PA in 2004.  She attended Rutgers School of Law—Camden, N.J. where she earned her Juris Doctor degree in 2008. Ms. Gambino was admitted to the practice of law in Pennsylvania and New Jersey in 2009.

From 2008 to 2009, Ms. Gambino was the law clerk for The Honorable Maria M. Sypek, Chancery Court in Trenton, NJ. After her clerkship, in 2010 she was an associate attorney for Heine Associates, a construction litigation defense firm in Cherry Hill, NJ.

In 2011, Rebecca Gambino became the associate litigation attorney for The Law Offices of Christian Thompson, P.C. were she immediately became responsible for her own caseload involving the management of personal injury litigation cases from beginning to resolution as well as assisting Christian Thompson in handling the firm’s larger, more complex cases that have resulted in awards or settlements of One Million One Hundred Fifty Thousand Dollars, $725,000.00, and $690,000.00.

Rebecca Gambino, Esquire is a thorough, well-prepared, aggressive advocate for the clients she represents.  Ms. Gambino balances her aggressive advocacy with a warm, family-like concern when answering the questions posed by clients and resolving the many issues that arise on the way to the resolution of a case by settlement, mediation, or trial.  She is committed to making herself thoroughly familiar with the facts and legal issues involved in each client’s case she handles and to returning their telephone calls promptly so they are well informed about the progress of their cases from beginning to end.  She goes one step further by regularly calling her clients, without being called by them, to discover their current concerns and physical symptoms and to make sure they understand the legal issues each case involves.

Ms. Gambino has a proven record of presenting very difficult cases in Pennsylvania and New Jersey courts.  For example, in a motor vehicle case in Montgomery County, PA in which the defendant’s insurance company offered zero dollars to resolve the claim because they were so sure they would win their case, Ms. Gambino took the case to a hearing and convinced the fact finders to award her client $30,000.00.